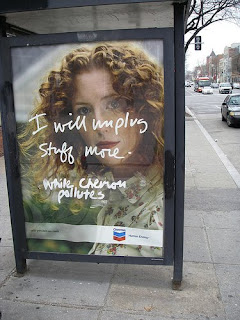 On Fossil Fools day, local DC activists
launched a Greenwash Guerrilla action
to help Chevron be a bit more honest in its advertising...


Today, on Fossil Fools Day, local DC activists launched a Greenwash Guerrilla action to help Chevron be a bit more honest in its advertising. The group decided to re-work Chevron’s hypocritical metro and bus stop ads that appeal to the public to reduce their individual energy consumption. A clarifying phrase was added to the ads, which portray people declaring that they will “use less energy,” “unplug stuff more,” “leave the car at home more,” etc. The phrase “While Chevron pollutes” was added to the bottom of each declaration using transparencies and clear packing tape.

“Chevron execs are Fossil Fools indeed if they think they can fool the public into thinking they are doing good things for the environment,” said one activist.

Outside of insinuating that the buck stops with individual action only, these ads are also interesting suggestions from a major fossil fuels company whose environmental record boasts such egregious and largely un-acknowledged atrocities as the dumping of more than 19 billion gallons of toxic waste water into Ecuador over a period of twenty-two years, or the releasing of around 3.8 billion pounds of toxic air and water pollutants into Richmond, Virginia each year. Or what about having been found complicit by the Nigerian government in gross human rights violations related to their oil production facilities there? Or taking over a company in Burma accused of assisting the Burmese military junta in the torture, murder and rape of villagers during the construction of a pipeline? Of course, there is much, much more (chevrontoxico.com/assets/docs/chevron-fact-sheet.pdf).

Clean up your act, Chevron!