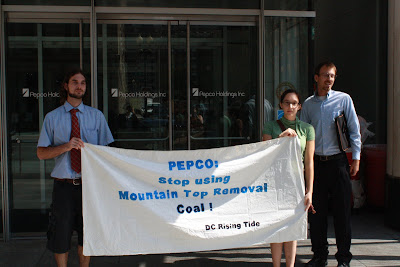 today, dc rising tide sent a letter to Pepco demanding that they stop sourcing their coal from mountain top removal sites, as well as asking them to not build any new fossil fuel power plants and to switch to renewable energy.

4 activists delivered the letter to the Pepco headquaters in Washington, DC.

the activists asked to speak with Joe Rigby, the president of Pepco, but his assistant said he was unavailable and accepted the letter on his behalf. 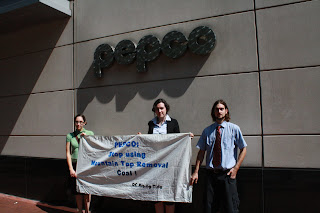 
here is a clip from the letter that was sent today:

"As residents of Washington DC and the surrounding area, we are extremely concerned that you have done virtually nothing to transition to renewable, clean energy for electricity generation. We urge you to immediately take real steps towards clean energy use, including the following:
• stop sourcing coal from mountaintop removal sites, publicly state your opposition to and refusal to source from mountaintop removal coal mining, and replace that supply with renewable energy (wind and solar energy); and
• halt construction of fossil fuel power plants."