Pepco(al) Under Fire for Sourcing Electricity from Coal 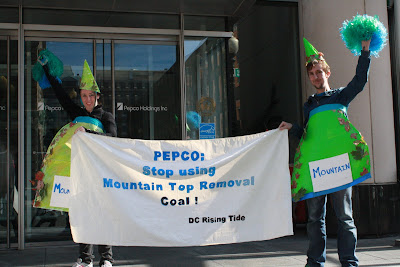 DC Rising Tide activists hold a street theater event in front of the headquarters of Pepco in Downtown Washington, DC, to demand that Pepco stop sourcing their electricity from Mountain Top Removal coal.


Pepco(al) under Fire for Sourcing Electricity from Coal

Video from the event: http://www.youtube.com/watch?v=UJ0yJ-n8O3w


Washington, D.C.
DC residents with the activist group DC Rising Tide today publicly presented their demands that Pepco stop sourcing electricity from coal, and particularly coal from Mountain Top Removal coal mining. The activists made their demands for renewable energy with a theatrical fight between “Pepcoal” and wind power in front of the headquarters of Pepco and its parent company Pepco Holdings. 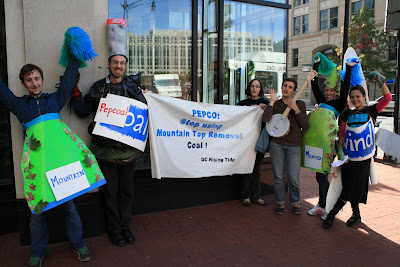 The "Pepcoal" smokestack, Wind Power, and Mountains at Pepco's office in DC

“As a DC resident receiving my power from Pepco, I am outraged that most of that electricity comes from burning coal, especially from coal from the Mountain Top Removal coal mining destroying Appalachia,” said Erica Madrid.

The activists demonstrated the role that Pepco Holdings plays in the destruction of mountains and valleys in Appalachia by enacting a fight between coal and a coal-burning power plant and wind energy, with the mountains and the planet representing the stakes in the fight. 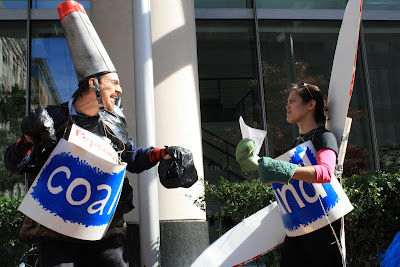 "Pepcoal" battles with Wind in front of Pepco's office building 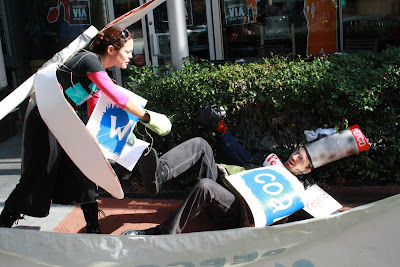 Wind knocks out "Pepcoal" to save the mountains 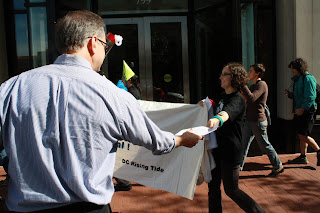 In 2008, the electricity that Pepco provided to DC residents came mainly (53%) from coal, and only 0.5% came from wind energy. A large part of the coal burned for Pepco electricity has come from Mountain Top Removal mining in Appalachia. In addition, the parent company Pepco Holdings, Inc. owns two coal- fired power plants and a number of other fossil fuel plants. Pepco Holdings renewable energy facilities represent less than 1% of the generating capacity of the facilities it owns. The company is even planning the construction of two new fossil fuel power plants.

The DC Rising Tide group’s demands include that Pepco Holdings stop sourcing electricity from Mountain Top Removal coal mining, replaces that electricity with renewable energy, and stop construction of new fossil fuel power plants. The public demand today comes several weeks after the group sent a letter with their demands to Pepco Holdings. The group received a letter in response that failed to respond to their key demands. 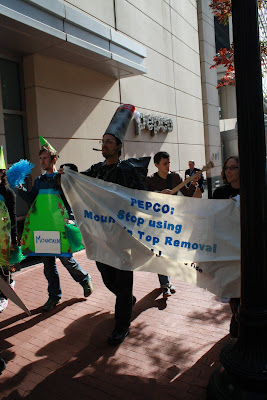 Mountain Top Removal coal mining means blowing off most of a mountain and pushing the fill into the valleys. MTR has destroyed over 500 mountains and over 2,000 miles of streams in Appalachia. Mining and burning of coal also represents one of the greatest sources of greenhouse gas pollution, which is fueling the climate change that threatens life on Earth.

DC Rising Tide, an all-volunteer collective organizing for climate justice, is making its demands of Pepco Holdings in solidarity with the communities of Appalachia that are struggling and taking action to stop the destruction of their mountains. 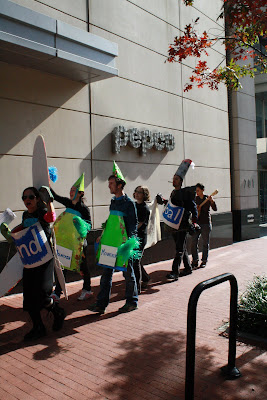