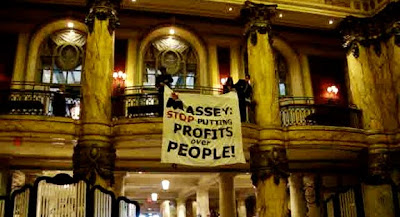 Mountain justice supporters disrupt Massey Energy stockholder meeting in the lobby of the hotel with with chants, signs, banner

Richmond, VA – Several activists have occupied the location of theMassey Energy stockholders meeting and have unfurled a banner from the balcony above the elegant grand foyer of the Jefferson Hotel in Richmond, Virginia. The banner reads, “Massey Stop Putting Profits Over People.” The activists are loudly reading an open letter (below) to Massey Energy demanding that the company cease mountaintop removal coal mining, a practice that is destroying central Appalachia. Several hundred mine workers and environmentalists are rallying outside the building on the street to demand that Massey Energy value mine safety.

"Coal mining is dangerous. It’s dangerous for our workers, dangerous for surrounding communities, and dangerous for the future of our planet. It’s time we move off of our dependency on coal and transition to a just, safe, clean energy future.” said Kate Rooth of Rising Tide, one of the activists who disrupted the meeting. “Massey Energy is notorious not only for putting their bottom dollar over people's safety, but for driving people out their communities and poisoning their drinking water."

Massey, a company with a terrible track record of safety violations was also responsible for the April mine disaster at Upper Big Branch mine in Montcoal, West Virginia which resulted in the death of 29 workers. In 2008, Massey made a $20 million settlement with the EPA for 4,500 Clean Water Act violations filed between 2000 and 2006. Now, in 2010, they are back in court for polluting America’s waterways again, this time for 971 Clean Water Act violations in 2008 and 2009.

The activists are occupying the mezzanine level in the main foyer of the Jefferson Hotel and the banner they have unfurled is a 10’ x 10’ hand-painted banner.

Over 500 mountains in the US have already been destroyed by mountaintop removal coal mining.

For more information on mountaintop removal coal mining and Massey

We interrupt this meeting of Massey Energy’s Shareholders in order to spotlight and oppose Massey’s terrible safety, environmental and human rights violations. It is our responsibility to stand in firm opposition to Massey’s corporate behavior. We are willing to face the legal consequences of our non-violent action, for we know we are not alone; millions in Appalachia and across the nation are coming to see Massey for what it is. Whether it is the mountains of Appalachia, the lives of underground miners deep inside them, or the wellbeing of communities living below, Massey continually puts profits over people. It is time for the people of Appalachia and America to reject Massey and work together to create something better in its place.

“Violations are, unfortunately, a normal part of the mining process,” Don Blankenship, CEO of Massey, has stated. In 2008, Massey made a $20 million settlement with the EPA for 4,500 Clean Water Act violations filed between the year 2000 and 2006. Now, in 2010, they are back in court for polluting America’s waterways again; this time for 971 Clean Water Act violations in 2008 and 2009. A 2006 fire at Massey’s Aracoma mine killed two workers. Massey settled wrongful death lawsuits for an undisclosed sum and paid civil and criminal penalties of $4.2 million.

It is clear that neither the EPA, criminal, nor civil fines, can sufficiently motivate Massey, or Blankenship, to adopt a culture of responsibility in their business practices.

When it comes to mountaintop removal and coal sludge , there is no responsible course but to ban them entirely. Mountaintop removal is the practice of demolishing Appalachian peaks, in order to scrape out their coal seams. It fills neighboring valleys and streams with the resultant rubble, and damages the health of nearby communities. Coal sludge is the liquid byproduct of washing coal in a carcinogenic chemical bath to remove impurities, such as heavy metals including arsenic, mercury, lead, and others. We call for the abolition of both.

The Brushy Fork Coal Sludge Impoundment is the tallest earthen dam in the Western Hemisphere, permitted to hold 9 billion gallons of sludge. Massey’s “sunny day” casualty estimation is that if the dam were to break, the flood would kill 998 Coal River Valley residents.

Coal sludge impoundments have failed in the past. A Massey-operated sludge impoundment in Martin County, KY broke in 2000, spilling 306 million gallons of toxic sludge into the tributaries of the Tug Fork, Big Sandy, and Ohio Rivers, killing wildlife, and contaminating 27,000 people’s drinking water. Brushy Fork sits above a honeycomb of abandoned underground room and pillar mines in which 31 pillars are of insufficient strength to reliably support the mine roof, let alone the mass of 9 billion gallons of sludge. Brushy Fork could also break through bottom failure, causing sludge to gush from abandoned mine entrances into the surrounding, populated valleys.

The peril of Brushy Fork is compounded by Massey’s mountaintop removal operations on the Bee Tree Permit , which surrounds the impoundment. Each day, Massey blasts within hundreds of yards of the impoundment. Every mine blast sends high and low frequency vibrations into the mountain. High frequency vibrations are the visible blast, launching fly rock and dust, and dissipate over a short distance. Low frequency vibrations, however, cause structural damages, often foundation cracks, miles from the blast site. Brushy Fork’s earthen dam structure is within hundreds of yards of blasting operations. Thousands of lives are at risk.

Massey must be stopped—that is why we are putting ourselves on the line today.

Shareholders – you have the power to intervene. Use your institutional power to demand Massey cease its mountaintop removal operations and production of coal slurry. Responsibly decommission the Brushy Fork Impoundment. Also, we ask that you join with the coalition of nine public institutional investors that are asking Massey to withhold support from Don Blankenship and Board of Directors Baxter F. Philips, Richard M. Gabrys, and Dan R. Moore “because they have failed to carry out their duties on the Safety, Environmental, and Public Policy Committee.”

Americans – coal from the mountains of Appalachia is burned all over the United States . It heats our homes, powers our factories, and illuminates our schools and offices. It is sometimes difficult connect one’s energy consumption to a struggle hundreds of miles away, but we urge you to take responsibility for that power and stand in solidarity with the people of Appalachia. We know that not everyone is able to put themselves at risk, but we firmly believe that all Americans can–and must– stand up and say: Massey Energy, Stop Putting Profits Before People!

Signed,People of the Earth and Appalachia
# # #