Jan 29: Funk the Warming - Down With the Fossil Hawks

>> Who?
. You, your fly crew, and your dancing shoes
. mad rowdy young people and our allies
. DC Students for a Democratic Society & DC Rising Tide
in alliance with the Peaceable Assembly Campaign 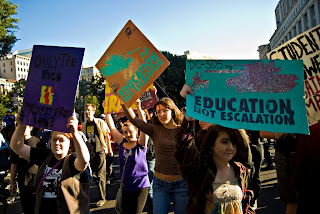 >> Why?
Last month, Fossil Hawks celebrated two great victories: the US-led failure of the Copenhagen climate summit and Obama's escalation of the War on Terror in Afghanistan and Pakistan. Thanks to their aggressive lobbying, the world's worst CO2 emitters, companies like Shell and Exxon, are free from new international pollution regulations and fixing to reap huge profits from Obama's expanding resource wars in the strategic oil and natural gas-rich war zones of the Middle East and Central Asia.

The importance of challenging the violence and treachery of corporate power is becoming increasingly clear to the Climate and Anti-War Movements. If we want to turn the tide of climate chaos and corporate resource imperialism, then 2010 must be a year of unprecedented cooperation between our movements in creative resistance against the Fossil Hawks.

With the US military's ranking as the world's #1 gas guzzler (oil consumer & user), buying from the top polluting transnationals, the problem runs deep. The annual CO2 output of the Iraq War is greater than 139 (60%) of the world's countries. It gets worse, but much of the toxic output from the War on Terror is hard to put a number on. We know that US bombs release heavy doses of other greenhouse gases, and pollutants like depleted uranium (DU) are in regular use. There is a long history of US military-industrial eco-devastation: trench warfare gases in WWI, nukes in WWII, agent orange in Vietnam, DU in Gulf War I, and it'll keep coming 'til we bring them down.

>> Fossil Hawks, WTF?
Fossil Hawks are the war-making corporate climate criminals and the politicians who serve them. They are the mining companies, energy companies, weapons manufacturers, military logistics companies, and mercenaries who profit from resource wars and lobby to sabotage US and UN environmental regulation. Many are at the top of the 122 companies responsible for 80% of global CO2 output. They are diversified corporations and lobbies invested in war and environmental exploitation.

* Shell simultaneously profits from Iraqi oilfields and from the fuel US tanks burn to protect them while clear-cutting for tar sands in Alberta and lobbying for "Clean Coal" technology in DC.