SHAME on EPA! DC residents speak out against EPA approval of MTR permit 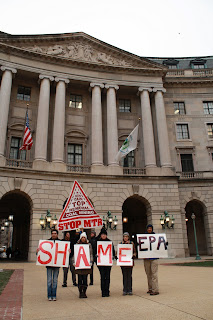 This morning concerned citizens spelled out the words “Shame EPA” at the Environmental Protection Agency Headquarters in protest of the agency’s decision to approve the Hobet 45 mining permit in Lincoln Co. West Virginia.

This permit is one of 79 permits which were deemed by the Agency to present significant environmental harm to the local watersheds thus requiring an enhanced review process. EPA claims that in the case of this permit they have found a reasonable compromise.

Unfortunately for residents of Lincoln County and surrounding waterways, this permit will still allow for 3 miles of intact streams to be mined as well as millions of cubic yards of hazardous fill to be placed in existing valley fills offsite.

Residents like Judy Bonds, Director of Coal River Mountain Watch and resident of West Virginia, express grave concern about this decision as they worry that it is a sign at the new year of things to come. "We, the affected citizens that are living with the impacts of this destructive mining practice, pray that this decision is not a preview of other destructive mining permits being approved."

She continued to express concerns that this decision would only encourage miners who have lately resorted more to fear tactics and violence. “The very sad thing about this decision it is that the coal industry will think that their thugery and their threats contributed to this decision and may encourage them to be more violent in the future. Shame, Shame EPA.”

“We certainly hope this is the last destructive permit approved that will allow the coal industry to continue to blast our homes and pollute our streams,” Judy added.

Even with the changes made to the permit unacceptable adverse impacts will be felt in the communities surrounding this mine. Mountaintop removal is a deadly practice and should be abolished immediately. 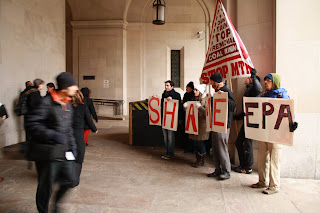