DC Rising Tide surprised Pepco(al) customers and staff today in the Pepco(al) lobby as they burst into song criticizing Pepco(al) for their delivery of electricity from coal, including coal from Mountain Top Removal coal mining in Appalachia. In this "flash mob" event, the activists entered the customer service area in Pepco(al)'s headquarters in Washington DC and called them out for "Destroying Mountains, Destroying Communities." 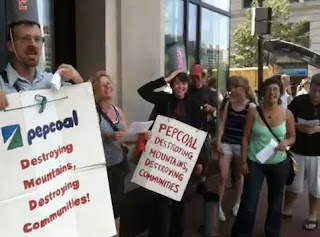 The singers also demanded that Pepco(al) stop sourcing energy generated from burning coal, particularly coal from mountaintop removal mining, use renewable energy like wind and solar instead, provide reparations to communities impacted by their power plants and by climate change, and cancel rate hikes for folks in DC. 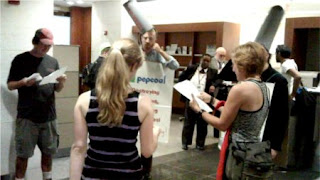 The flash mob comes one year after DC Rising Tide initially delivered demands to Pepco at their headquarters. DC Rising Tide returned today as part of the Appalachia Rising movement to save the mountains, culminating in massive street demonstrations on Monday the 27th. 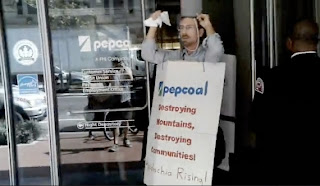